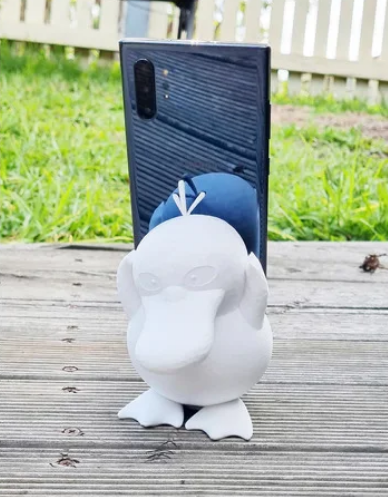 Took the awesome model made by ShadowBons and did some Meshmixer/Tinkercad (noob) trickery to create a phone stand. You’ll see the head is kinda lower poly because I couldn’t import the original into tinkercad so had to reduce the triangles. Theres two versions here:

1) Freestanding psyduck – You might have to play with infill settings towards the base to make it heavier in order to support the phone, hopefully it should hold

NOTE:
I originally printed the freestanding version but the legs were too far forward and it would topple with the weight of my phone (Galaxy Note 10+), so I created the additional base leg and superglued it. Updated the model so that the legs are further back to support the weight, but also just provided the supported version too as I can confirm it holds well.

Will paint and coat this soon so its not just a white piece of plastic!

I printed the feet, base leg, and hair strands at 80% infill (customised within Cura), rest of the model was done at 25%
Used tree supports in Cura, they came off really easy!
Had to do slight cleanup on the hairs on its head as they were a bit thin for my printer

How I Designed This

1) Downloaded the original model
2) Opened it in meshmixer to seperate the feet from the body, exported two models
3) Had to reduce the poly count on the body to import into tinkercad – did that in meshmixer
4) Cut out the phone groove on the back but needed more volume to let the phone sit, so replaced the majority of psyducks lower body with new wider sphere to give more surface area
5) Exported and printed