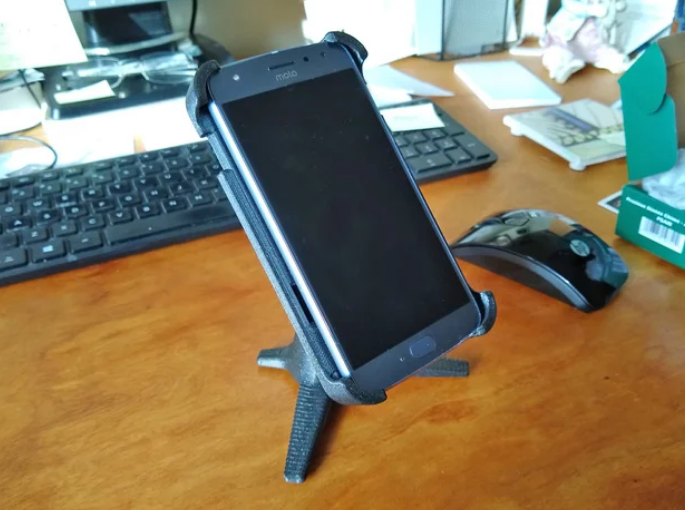 What’s so satisfying about this phone stand? Is slides into place in the spring-loaded clip with a satisfying click. It pivots with a satisfying smoothness. It tilts with a satisfying nudge of your finger. Designed for phones 2.8″ to 3.25″ wide (just scale if your phone is outside this range). Instead of relying on flexing plastic which creeps over time, or adjustment screws which forever need adjustment, it uses rubber bands (four #33 rubber bands, or something similar) to provide just the right level of friction on each joint.

Assembly
After printing one of each part, clean up all of the mating surfaces to make sure everything fits smoothly together. Next, slide the Knob piece into the fork in the Base and loop a rubber band around the ends of the fork a number of times until you get the desired amount of friction in the pivot joint. Now slide the Slider into the Base and tease a rubber band into the oval groove formed into the two pieces. Make sure the rubber band lies flat in the groove. Add a second rubber band in parallel with the first.

To assemble the Knob to the Base, you’ll need to make a hook tool with a large paper clip. Straighten out the paper clip and then use pliers to put a small hook in one end. Push the Tee into the Knob so that the end with the hole sticks out of the ball side of the Knob. Take a single #33 rubber band and double it over. Shove 2 loops of the rubber band through the hole in the end of the Tee. Center the rubber band so that you have two loops on one side of the hole and two loop on the other side. Slide the hook end of the hook tool up through the bottom of the base and catch all four rubber band loops over the hook. Pull the tool back through the base, and transfer the loops onto the hook in the bottom of the base. If you want more tension, twist the hook took a few times before transferring the loops to the hook on the base.

Finally, it’s a nice touch to add 4 adhesive backed rubber feet to the bottom of the stand.