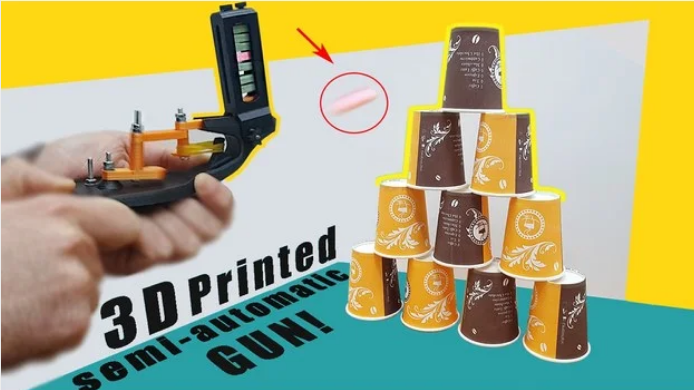 This 3d print gun is semi-automatic. You just have to pull back the latch while shooting. In this way, the bullet slot is opened. Bullets fall into slot sequentially, by the gravity. And boom!

The rubber band provides the energy to launch the bullet. As you can see, the basic principle of the gun is based on a mechanism that converts circular motion into linear motion. When you pull the latch, we convert the circular motion to linear motion, which makes the rubber band stretch. The stretch amount of this rubber band is 3cm. That is, we pull the rubber band about 3 cm. In this way, an energy is stored and when we release the latch, this energy is released and the striker at the end of the action hits the bullet. In this way, the bullet takes off quickly.

I designed 2 kinds of magazines. One for 12 bullets and the other for 20 bullets. You can scale the magazine and load as many bullets as you want.

I was actually going to use the scotch yoke mechanism to stretch the rubber band, but I thought there would be a lot of friction. That’s why I designed something like this.

I really enjoyed the test parts while shooting the video. I hope you will like it.
Enjoy!